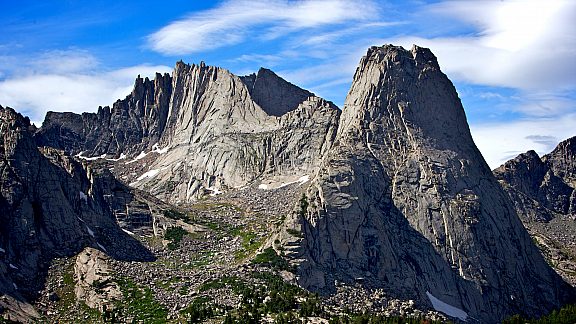 Cirque of the Towers

The Cirque of the Towers is a stunning semi-circle of fifteen, 12,000-foot craggy peaks that form a portion of the Continental Divide in the Wind River Mountain Range. The Cirque is a world-renowned mecca for backpackers and rock climbers. The Cirque offers spectacular scenery for hikers and classic technical rock climbing routes, as well as fishing, camping, and day-hiking opportunities. 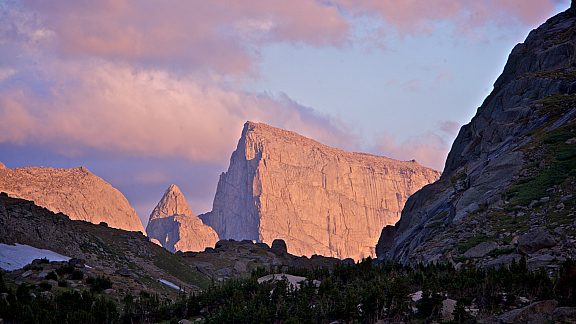 Backpackers and day hikers love the Cirque’s dramatic landscape, with granite spires in a high alpine wilderness setting. This is not a destination for the novice hiker. Visitors choosing this as their destination should be experienced hikers in good physical condition, acclimated to high elevations and steep, rocky terrain. Adventurers have many resources at their disposal and maps, guidebooks, and online research specific to this area are highly recommended.

Much of the area surrounding Cirque of the Towers is above tree-line and thus exposed to sometimes extreme weather patterns. Be prepared for storms, especially midday, and be well off of any peaks or high spots before the storms roll in. The terrain is very rocky and uneven. Hikers should exercise caution at all times when crossing boulder fields or areas of low maintenance to prevent injury. 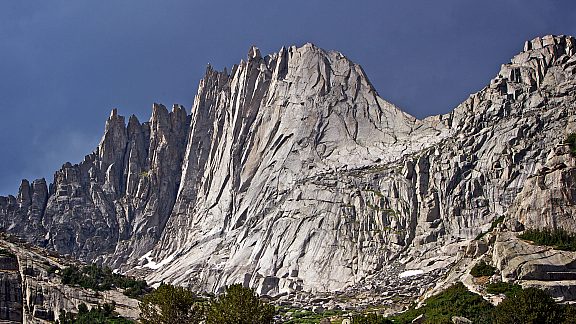 The Cirque attracts technical climbers from around the world to ascend the sheer granite walls and spires. It is an internationally known climbing area with many quality routes. Appearance-based names like Shark’s Nose, Warbonnet, Warrior One, Wolf’s Head, Pingora, and Lizard Head add character to this picturesque playground. Pingora is the central and most prominent tower in the Cirque. Technical ratings range from 5.2−5.11, and Pingora has one of the easiest approaches.

The northeast face of Pingora is listed Steve Roper’s book 50 Classic Climbs of North America. Warbonnet has a knife-like summit and sheer granite faces on three sides, with technical climbs rated 5.6 – 5.11a. The approach is steep and bouldery, and vestiges of snow remain most of the year. All of the climbs in the Cirque involve multiple pitches of technical climbing, combined with long sections of exposed, sometimes unroped scrambling to reach the summits. It is important to begin early, and an alpine start of at least 5 AM is recommended by seasoned climbers. In the climbing season, regular afternoon storm cycles lash the towering walls and faces with dangerous rain and lightning, and all climbers should be well off any peaks before the storms hit. 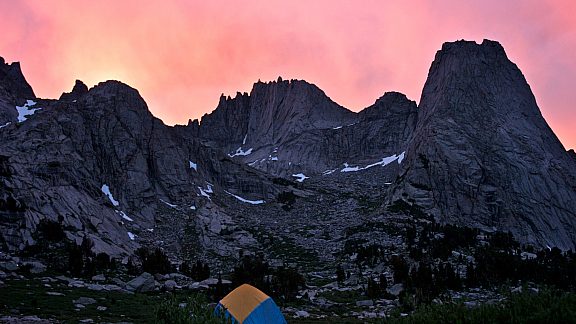 Campsite locations are rather sparse near and in the Cirque, and privacy is minimal due to the alpine setting. Because of the fragile landscape, visitors are asked to practice minimal impact camping techniques. Within the Cirque itself, camping is prohibited within a quarter-mile of Lonesome Lake to preserve this ecosystem. 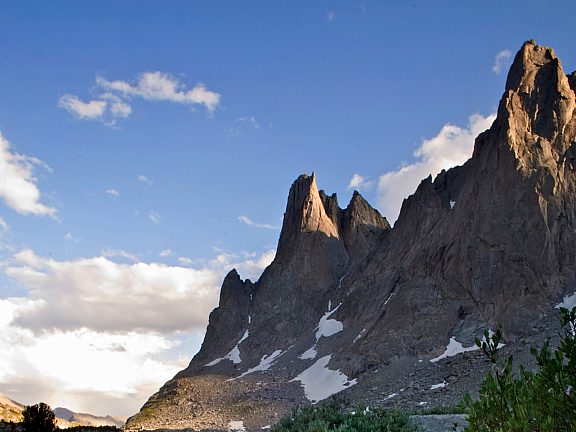 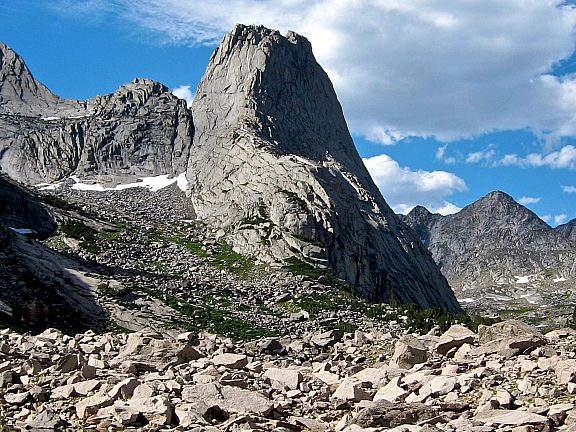 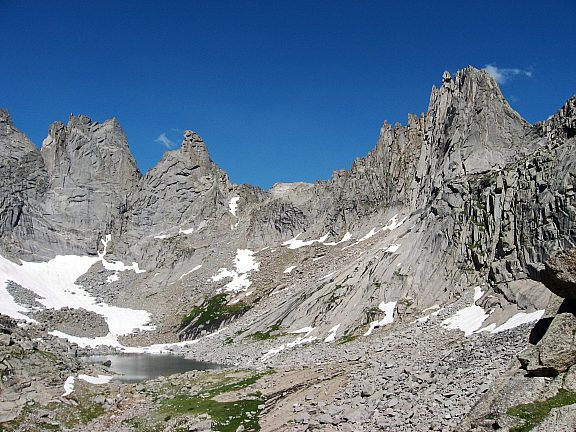 The season to visit is spring to late summer. Spring brings fewer mosquitoes, but the risk of a snowstorm. Summer brings better weather, dryer conditions, and wildflowers, but more pesky bugs. To fully enjoy this area, it is suggested visitors plan a minimum three-day and up to a week-long visit.

The Cirque of the Towers is located ten miles into the Bridger Wilderness in the southern portion of the Wind River Mountain Range. Access via the Big Sandy Trailhead.

Accessing the Cirque of the Towers

Access from the western side of the Wind River Range is via Big Sandy Trailhead. This is a remote location with no services, no phone reception, and no town access; the nearest town with substantial services for supplies is Pinedale, 55 miles to the north. The road into Big Sandy is partly paved followed by 27 miles of low maintenance rough gravel roadways. Big Sandy Campground is located at the trailhead and has 12 sites. When you begin your hike, be sure to register at the trailhead as you embark into the wilderness. There are several trail networks that can provide access into the Cirque from varying locations, so a map is an excellent resource and highly recommended to all visitors.

Trails to the Cirque of the Towers

Expect plenty of company on the trail, including on foot hikers and climbers, horse pack strings, and those with llamas. 10,800′ Jackass Pass is not recommended for livestock due to low trail maintenance, exposure, and very rocky, winding terrain. Portions of this trail may involve scrambling over boulders and across rock slabs. This area is not recommended for novice hikers. The trail to the Cirque from Big Sandy Lake involves a 1500’ elevation gain, before dropping into the Cirque. Hikers should have appropriate footwear and be in good physical condition for this trek.

This area may also be accessed via a number of passes on the backside of the Cirque. Expect the passes to hold snow for most of the year, and travel with appropriate equipment to ensure safety. Be prepared with a map, guidebook, compass, or GPS for all off-trail routes and passes. 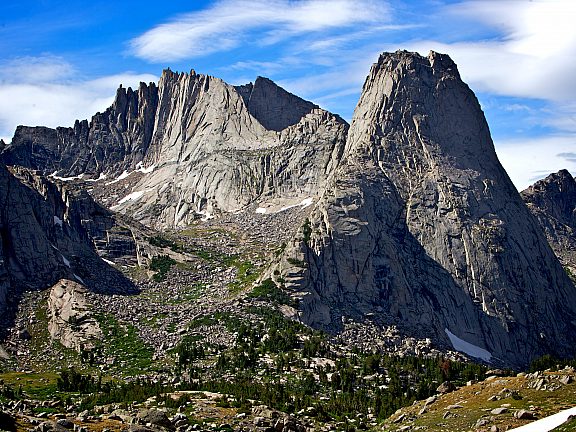 Cirque of The Towers Preparedness

The remote location of Cirque of the Towers necessitates the use of extreme caution for all adventurers. Due to its distance from Pinedale, rescue and/or medical help is not immediately forthcoming. Rescue and medical attention can be thwarted by storms or other natural disturbances, causing a delay in helpful resources. The best way to ensure safety is to practice safety.

Be aware that this is a very remote country, and potential dangers are part of the wilderness experience.

Campers should be "bear aware" and are required by US Forest Service mandates to implement proper food storage methods and keep a clean camp to avoid attracting bears. Bear-proof portable food storage containers are available for loan at the Pinedale Ranger District and at the Great Outdoor Shop in Pinedale for a small fee.

What type of experience are you looking for?

Added To Your Itinerary

Removed From Your Itinerary